Strategic significance of an helium supply for the UK ... 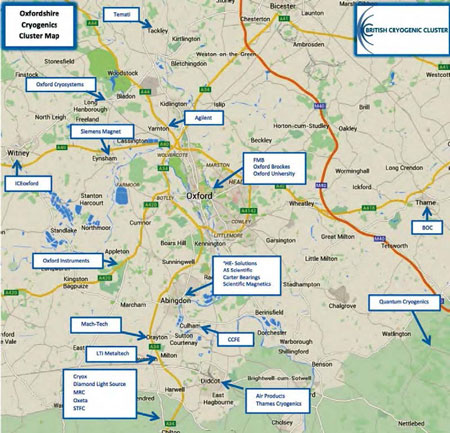 Many, but by no means all, of the companies in the cryogenic community are clustered around Oxfordshire, as shown on this map.

The UK imports all of its helium, mostly from the USA and Qatar, and is therefore directly impacted by supply shortages, insecurity and market price escalation.

Annual helium importation represents an approximately £100 million deficit to the UK's balance of trade and this will likely to continue to increase sharply as the global supply shortage feeds through into commodity pricing.

Security of supply will be a key consideration for researchers, business users, and importantly for the NHS. The main industrial gas suppliers have already instigated rationing of their customers and have indicated that supply shortages will continue for some time.

Increased recycling and the reduction of wastage, including the use of helium in party balloons, are clearly necessary, but are not in themselves considered by experts to be sufficient. New sources of helium are also urgently needed.

Soil and waste methane vent gas geochemistry (~100 sites) conducted by HRL in the UK, with assistance from Oxford, Durham Universities and MIT in the USA has confirmed helium presence.

Helium concentrations in some areas of the UK are comparable to producing US analogues and as a result fully support exploration drilling.

Helium Resources Limited is ready and able to carry out that work using private funding, but requires a licence that so far the UK government has not been willing to consider granting. As supply insecurity and price risk heighten it seems illogical that the UK would not seek to establish if it can produce some of the vitally needed helium.